Parman’s first interest for a career in hair design began at the young age of six, when she visited her aunt’s salon to watch her style hair. By the time she was eight, Parman would regularly assist her aunt. Parman shampooed clients’ hair for a nickel each. After many weekends learning from her aunt, Parman became truly inspired to pursue a career as a professional hair designer. The road to become a successful hairdresser was not an easy one. Parman continued to move forward and has always taken on any challenge to do whatever it may take to accomplish her career goals.

Parman has achieved much success as a hairdresser for the past 30 years. She received her cosmetology certification in high school. Parman’s perseverance and persistence landed her a job at a high end salon right after graduation. While working at several high end salons at the early stages of her career, she learned from several master hairstylists the importance of mastering your trade and craft as well as how to continually take advantage of advanced educational opportunities to create a successful career.

Parman’s desire to continually learn drove her to enroll in as many advanced courses as she could at national beauty trade shows, regional events and cosmetology schools. She remains a wonderful example of how combining pure talent with creative energy, positive attitude and hard work will enable a hairstylist to succeed in the professional beauty business.

Parman knows that a basic cosmetology degree and license merely give you the opportunity to launch your career. She knows that it isn’t where a cosmetology education is received that is important. It is more important to stay educated and up-to-date with all of the latest hair services, products, techniques, fashion and beauty trends. Parman has proudly worn professional salon hair extensions for the last ten years.

Today, her mastery and artistry with professional salon hair extensions has earned her national and international respect. As a professional hair designer and hair extensionist, Parman has performed on stage at national conventions and beauty shows, while training others in haircolor blending techniques and creative hair extension artistry. In working with Di Biase Hair Extensions USA, she hopes for more opportunities to help others as a respected platform artist so that she may share what she has learned through the years.

Parman has had the pleasure of putting hair extensions on some of Michigan’s most well-known celebrities such as Nicole Blaszczyk who was Miss Michigan 2009, the Detroit Dolls Dance Team and Nancy Skinner of Fox TV News. Nicole Blaszczyk loves her Di Biase Hair Extensions. She shared with Parman that if she had the hair extensions during the Miss America pageant, she may have won!

She plans to develop superior distribution and educational systems for Di Biase Hair Extensions USA while she and Dale Aho work closely with each regional distributor, salon sales consultant and educator. Parman says, “My top priority is to personally help other salon owners and hair designers, to help share my knowledge and to help get them excited about what they are doing.

To be a success, not only do hair designers need to receive technical know-how with advanced training, but they also need to remember to have some fun, be creative and to just let their creative energies flow.”

This week the Hair Artist Association,LLC is shifting gears and bringing on some marketing experts for you to learn the marketing side of your career in order to be successful. Our special guest this week is Rod Ferrier of Create More Business Now.

As a serious student of Dan Kennedy and Bill Glazer, two of the top copywriters and direct response strategists in the country, Rod Ferrier has successfully taken these teachings to craft creative marketing plans for businesses which cater to their individual strengths and goals.

Whether you are a professional practice, a service business, or a “solopreneur”, Rod has a keen awareness for diagnosing your marketing challenges, both online and offline. He then prescribes laser focused strategies which address those specific needs and will get you results fast with a consistent return on investment.

Rod also has developed a successful blog which is used as a tool to get other businesses on the first page of Google in a very short time. This strategy along with his extensive knowledge of social media has earned him the title Doctor of Successful Marketing Strategies.

If you are a small business owner who is struggling with the never ending challenge of bringing new clients in your door, then Rod is the guy you should call to ease the pain caused by expensive, manic marketing. He’ll diagnose, then prescribe, showing you how to replace it with a continuous flow of new prospects and increased profits using laser focused online, off line, text, email, and mobile marketing and social media messages designed specifically to bring your “best” clients in the door.

Accountable results you can track. That’s what the Doctor does best. Call him. To learn more about Rod Ferrier visit Create More Business Now.

Also tune in this Thursday, October 13, 2011 to hear Rod Ferrier and Charlotte Howard founder of The Hair Artist Association, LLC discuss the importance of marketing in your career. 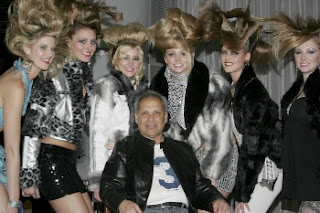 I had the privilege of meeting Fernando in person at a continuing education class ,he was teaching at Lacy Cosmetology. After speaking with him and learning more about his products. I knew that I would want to learn more and more from Fernando to stay up to date with the industry.

I hunted him down to appear on The Hair Artist Association,LLC Radio Show because I felt his value would bring our members and others great success in the industry. Now we are having him as a guest September 29, 2011. To learn more about Fernando keep reading but to join us on the show go to http://blogtalkradio.com/hairartistassociation

Fernando Salas has been inspiring, educating and mentoring other hairdressers for more than 35 years. His passion for the profession has helped take him from behind the chair to the stage as a successful platform artist to a salon owner to a manufacturer of a line of signature hair care products. As he continually strives to create products that help hairdressers push the limits, his primary focus is teaching them how to use the products and rediscover the creativity within.

The son of a barber, Salas was still in high school when he became a licensed cosmetologist. After spending a year working in a salon in an affluent area of Southern California, he left for Europe to soak in the education and broaden his expertise. He realized early on that being young and talented simply wasn’t enough. People wanted hairdressers with experience. So he turned to learning what he could from the best in the world in an effort to increase his clientele upon his return to the states.

Salas’ passion for education led him to various companies, including Helene Curtis, Clairol, New Image and Brilliant Products. He also worked behind the scenes to develop products for them, sparking the idea that he should create a line of his own. It would be years before he acted on it, concentrating instead on his skills as a master artist and representing the U.S. in the World Hairdressing Championships.

In 1999, Salas was invited to participate in the Premiere Beauty Show in Orlando. As he spent his day on stage styling hair, his wife and business partner Patricia sold the spray product he was using. By the end of the first day 200 pieces had sold – and the product didn’t even have a name. Salas knew his days of working for others were over, and by the end of the trip, he had christened the soon-to-be developed line White Sands.

Launched in 2000, White Sands is a comprehensive line of cleansing, conditioning, treatment, styling and finishing products that work from the inside out to nurture and protect the hair. In addition to the wet line, White Sands offers shears, styling tools such as flat irons and Velcro strips and collateral material such as instructional DVDs and brochures.

A family-owned and operated venture, Salas works closely with his sons Aarron and Noel to ensure that the branding of the line is in tune with its growth. He oversees all company operations, including research and development, photo shoots and image in addition to spending four days weekly behind the chair in his Newport Beach, CA-based salon. His dedication to education has not gone unrecognized: show demand has tripled for 2006 resulting in Salas expanding his team of educators.

In the coming months, Salas plans to introduce new products to both the hair care and styling tool lines. As the demand for White Sands increases worldwide, the line is quickly becoming as recognized for its innovative products as it is for the fantasy hair it showcases at trade shows and its vast celebrity presence on Hollywood movie and TV sets.

An industry veteran who has worked diligently to create a line where the results of the products are only limited to the creativity of the user, Salas continues to push the envelope among hairdressers as he spreads the message that knowledge is power.